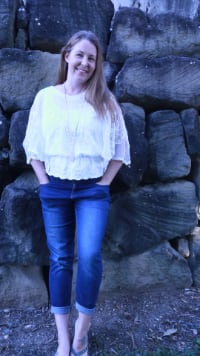 I feel very honoured to be wandering the Earth in this period of time. There is a lot of anger and angst in the air with so much political unrest and decades of intense habitat loss across our planet that has left those with a sensitive heart devastated. At the same time, though, there is perhaps more environmentalists and people who would not take that label but care deeply for the Earth and its creatures than ever before. It’s wonderful to be among this large and special group and to be able to give voice to their concerns through film making.

I have a long background in wildlife care and habitat management jobs. I worked for the RSPCA Wildlife Clinic in Canberra for several years and have worked for many more as a fauna spotter, relocating animals away from sites of habitat destruction. I still do this kind of work from time to time but it stopped being a full time vocation when I gave birth to my first daughter, Alice, and the unstable nature of the work and all of the travels it usually entails became impossible for my life. Despite having no choice but to move away from this type of work I welcomed the transition because it was incredibly difficult and frustrating to watch – tree by tree – as land was stripped to the dusty layer below the soil just to be turned into another housing development or shopping complex.

It was then that I made the transition into film making and set to work on my first documentary which, after more than three years of work, is now finished and being viewed by theatre audiences. Initially, I had planned to focus on the subject of marine debris ingestion by sea turtles as a PhD project but as I did some initial digging around into the topic, discovered that balloons were being targeted by sea turtles to a frightening degree and the balloon industry was marketing themselves as an environmentally friendly industry selling 100% biodegradable products (latex balloons). I could also see that there were scientific papers to the contrary but they were doing little more than gathering digital dust. I scrapped the idea of PhD (although I am coming back to that idea now but with a different topic) and set off on a film to set the record straight about balloons. I have a couple of other films in the pipe line, some are of topics that are related to marine debris and others are not. I think it’s important to follow your interests, even if they are widely varying.

I am also a contributing writer for 1 Million Women and Enzyme Arts Magazine where I usually write about topics related to wildlife conservation, sustainability, and my family’s journey toward a zero waste life. I grew up in beautiful Washington State in the USA but have lived in Australia since 2006.  I live on Gold Coast with my partner Sam and our beautiful daughters Alice and Ivy.