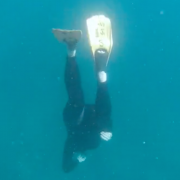 I am a hopeless blogger these days. I have been so busy at work (I find and relocate wild animals from major construction jobs for a living which can be really hectic!). I’m also so close to being done with my masters degree I can taste it. I was originally planning to go straight into a phd but I decided recently that I need a break. And I want to make a film.

I’ve been thinking a lot, too, about my cousin Sam who we recently tragically lost at 24 years of age. He was such a cool guy and I know that so many of you reading this knew and loved Sam like I did. He and I used to always talk about making a tv show or a film together one day. He always thought the stuff that I did was really rad and you know what, he would think I was incredibly retarded if decided to go to SCHOOL instead of making an awesome film. And he’d be right. School will always be there but wildlife film making has always been my dream. I have done lots of little films and random tv stuff before but never a really big project and I think the time has come.

Lots more about this later but for now, here is a little mini movie I made yesterday after a recent snorkel trip to Byron Bay. It was my first time using a go pro and first time using iMovie!