You are here: Home / Articles / koala

From gay to straight and everything in between, there is an enormous amount of sexual inclinations out there and every last scintillating one of them is natural. There is not one mating system that humans have thought of that an animal did not think of first. Sex is, after all, an animal act. 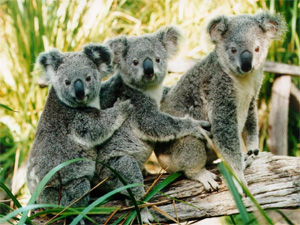 Homosexual behaviour has been documented in over 1500 species and well-studied in about 500. More often than not this “homosexual” behaviour has to do with female/female interactions rather than male/male interactions (although there are plenty of documented accounts of those as well). The most common female/female sexual interactions that you see don’t seem to be inspired by a genuine attraction of a female to another female as much as its a way to for the females to signal to the males that they are ready to be mated. Females are not fertile all the time so homosexual behaviour is one way that they can signal to males when they are. Its comparable to girls making out with each other in night clubs as a way to get the attention of men. Males don’t need to use this same technique to signal to us when they are ready to mate because they are always ready to mate. They don’t have cycles of fertility like we girls do.

Cows are one of these species famous for lesbian behaviour. The girls will regularly mount one another when they are in heat which researchers think is partly to do with their peaking oestrogen levels (which make them feel uncontrollably sexual) and partly to do with their needing a way to signal to the males that they are fertile. My research advisor at the University of Queensland is studying this same behaviour in koalas. Captive female koalas will mount one another when there is a male koala around but, interestingly, not if they are left alone. Sometimes they will reject the advances of the male, though, and continue on with the lesbian escapade. Why this happens is a biological mystery.

Because of this way that many female animals will display homosexual behaviour when they are in heat or otherwise ready to mate, male animals seem to be forever on the lookout for signs of girl-on-girl action. With this in mind, it makes perfect sense that a man would get a rise out of watching lesbians in action. There must be some ancient, primal, instinctual thing happening in men (most of them, anyway) that recognises female homosexual behaviour as a sign of female fertility and mating-readiness.

Let it be known, though, that while it appears that many female animals act homosexual as a way to attract males, there are plenty of truly homosexual female animals who don’t seem to be, in any way, seeking male attention by way of their behaviour. The classic example is the swan family. Swans are known for being exceptionally loyal in terms of mate choice. Swan couples generally stay together for life and it is not uncommon for them to choose a mate of the same sex. Probably the most famous lesbian swan couple lives in Boston Public Garden but there have been many others documented elsewhere.